It is important to address the potential pitfalls of a race for transformative AI, where:

Race dynamics may develop regardless of the motivations of the actors. For example, actors may be aiming to develop a transformative AI as fast as possible to help humanity, to achieve economic dominance, or even to reduce costs of development.

There is already an interest in mitigating potential risks. We are trying to engage more stakeholders and foster cross-disciplinary global discussion.

We held a workshop in Tokyo where we discussed many questions and came up with new ones which will help facilitate further work.

The General AI Challenge Round 2: Race Avoidance will launch on 18 January 2018, to crowdsource mitigation strategies for risks associated with the AI race.

What we can do today:

Research and development in fundamental and applied artificial intelligence is making encouraging progress. Within the research community, there is a growing effort to make progress towards general artificial intelligence (AGI). AI is being recognized as a strategic priority by a range of actors, including representatives of various businesses, private research groups, companies, and governments. This progress may lead to an apparent AI race, where stakeholders compete to be the first to develop and deploy a sufficiently transformative AI [1,2,3,4,5]. Such a system could be either AGI, able to perform a broad set of intellectual tasks while continually improving itself, or sufficiently powerful specialized AIs.

“Business as usual” progress in narrow AI is unlikely to confer transformative advantages. This means that although it is likely that we will see an increase in competitive pressures, which may have negative impacts on cooperation around guiding the impacts of AI, such continued progress is unlikely to spark a “winner takes all” race. It is unclear whether AGI will be achieved in the coming decades, or whether specialised AIs would confer sufficient transformative advantages to precipitate a race of this nature. There seems to be less potential of a race among public actors trying to address current societal challenges. However, even in this domain there is a strong business interest which may in turn lead to race dynamics. Therefore, at present it is prudent not to rule out any of these future possibilities.

The issue has been raised that such a race could create incentives to neglect either safety procedures, or established agreements between key players for the sake of gaining first mover advantage and controlling the technology [1]. Unless we find strong incentives for various parties to cooperate, at least to some degree, there is also a risk that the fruits of transformative AI won’t be shared by the majority of people to benefit humanity, but only by a selected few.

We believe that at the moment people present a greater risk than AI itself, and that AI risks-associated fearmongering in the media can only damage constructive dialogue.

Workshop and the General AI Challenge

GoodAI and the AI Roadmap Institute organized a workshop in the Araya office in Tokyo, on October 13, 2017, to foster interdisciplinary discussion on how to avoid pitfalls of such an AI race.

Workshops like this are also being used to help prepare the AI Race Avoidance round of the General AI Challenge which will launch on 18 January 2018.

The worldwide General AI Challenge, founded by GoodAI, aims to tackle this difficult problem via citizen science, promote AI safety research beyond the boundaries of the relatively small AI safety community, and encourage an interdisciplinary approach.

Why are we doing this workshop and challenge?

With race dynamics emerging, we believe we are still at a time where key stakeholders can effectively address the potential pitfalls.

It’s possible that through this process we won’t find an optimal solution, but a set of proposals that could move us a few steps closer to our goal.

This post follows on from a previous blogpost and workshop Avoiding the Precipice: Race Avoidance in the Development of Artificial General Intelligence [6].

Topics and questions addressed at the workshop

General question: How can we avoid AI research becoming a race between researchers, developers, companies, governments and other stakeholders, where:

At the workshop, we focused on:

We are continually updating the list of AI race-related questions (see appendix), which will be addressed further in the General AI Challenge, future workshops and research.

Below are some of the main topics discussed at the workshop.

1) How can we better understand the race?

2) Is the AI race really a negative thing?

3) Who are the actors and what are their roles?

4) What are the incentives to cooperate on AI?

One of the exercises at the workshop was to analyze:

One of the prerequisites for effective cooperation is a sufficient level of trust:

Predictability is an important factor. Actors who are open about their value system, transparent in their goals and ways of achieving them, and who are consistent in their actions, have better chances of creating functional and lasting alliances.

5) How could the race unfold?

Workshop participants put forward multiple viewpoints on the nature of the AI race and a range of scenarios of how it might unfold.

As an example, below are two possible trajectories of the race to general AI:

Example: Similar technology advantages have played an important role in geopolitics in the past. For example, by 1900 Great Britain, with only 40 million people, managed to capitalise the advantage of technological innovation creating an empire of about one quarter of the Earth’s land and population [7].

Example: This direction would be similar to the first stage of space exploration when two actors (the Soviet Union and the United States) were developing and successfully putting in use a competing technology.

The diagram below explores some of the potential pathways from the perspective of how the AI itself might look. It depicts beliefs about three possible directions that the development of AI may progress in. Roadmaps of assumptions of AI development, like this one, can be used to think of what steps we can take today to achieve a beneficial future even under adversarial conditions and different beliefs. 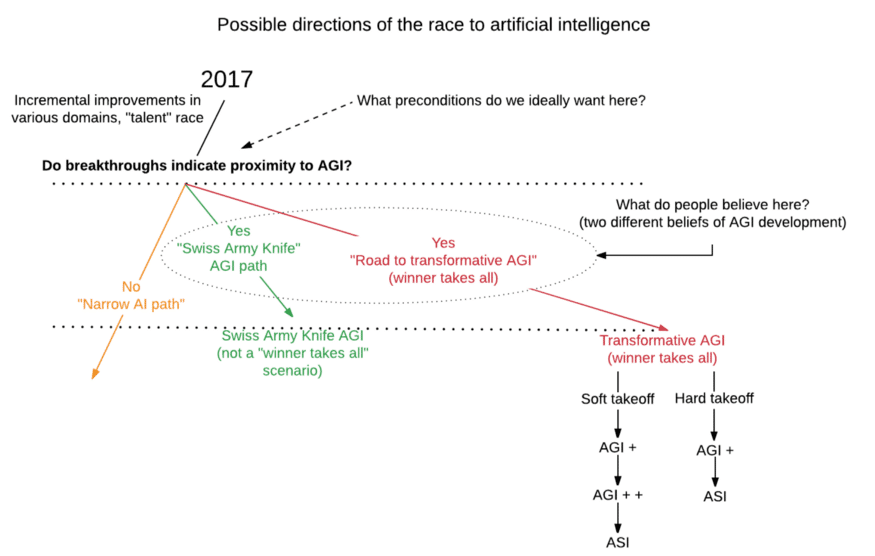 Assumption: We are in a race to incrementally more capable narrow AI (not a “winner takes all” scenario: grab AI talent)

Assumption: At some point (possibly 15 years) we will enter a widely-recognised race to a “winner takes all” scenario of recursive AGI

Assumption: AI/AGI will require large datasets and other limiting factors

Assumption: AGI and its creators will be easily controlled by limitations on money, political leverage and other factors

Assumption: AGI will be a singular broad-intelligence agent

Fear of an immediate threat is a big motivator to get people to act. However, behavioral psychology tells us that in the long term a more positive approach may work best to motivate stakeholders. Positive public discussion can also help avoid fearmongering in the media.

We are aiming to create a better future and make sure AI is used to improve the lives of as many people as possible [8]. However, it is difficult to envisage exactly what this future will look like.

One way of envisioning this could be to use a “veil of ignorance” thought experiment. If all the stakeholders involved in developing transformative AI assume they will not be the first to create it, or that they would not be involved at all, they are likely to create rules and regulations which are beneficial to humanity as a whole, rather than be blinded by their own self interest.

In the workshop we discussed the next steps for Round 2 of the General AI Challenge.

About the AI Race Avoidance round

At GoodAI we are open to new ideas about how AI Race Avoidance round of the General AI Challenge should look. We would love to hear from you if you have any suggestions on how the round should be structured, or if you think we have missed any important questions on our list below.

In the meantime we would be grateful if you could share the news about this upcoming round of the General AI Challenge with anyone you think might be interested.

More questions about the AI race

Below is a list of some more of the key questions we will expect to see tackled in Round 2: AI Race Avoidance of the General AI Challenge. We have split them into three categories: Incentive to cooperate, What to do today, and Safety and security.

What to do today: