Usually, in Deep Learning, the tasks are solved by a big monolithic Artificial Neural Network.

Compared to this, one of the properties of the Badger architecture is modularity: instead of using one big neural network, the Badger should be composed of many small Experts which solve the whole task in a collaborative manner. Further assumption is that these Experts share the weights, therefore are identical at the beginning.

Despite the fact that this approach introduces several complications, it has many benefits as well.

Several benefits of modularity include:

This article uses simple experiments to illustrates the following topics:

Code for the experiments available here at github.

Similarly to these papers [Huang et al, 2020], [Medved et al. 2020] a modular policy is used to control robots. We have simple manipulator robots, where each segment is controlled by one simple Expert. These Experts share weights (and are implemented using either a MLP or LSTM network).

Here, the task is to reach the target position marked by the red square.

Our custom simulator is fully differentiable and therefore the policies can be trained quickly in a supervised setting. 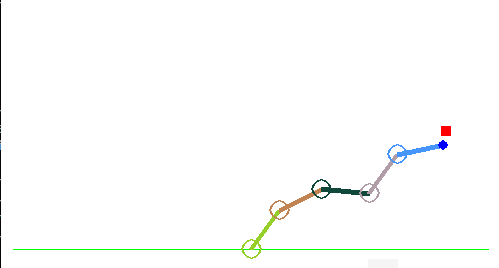 In case the robot has 5 segments there is 5 Experts. Each Expert is observing own segment of the robot (position in 2D space) together with the common goal and is able to control it (applies force to the rotation of the joint).

Together, these Experts should collaboratively achieve the common goal, in this case: reach the goal position with end of the robot.

We compare modular approach with several baselines. These are:

The following graph shows learning curves of shared modular policies compared with baselines. The loss is a mean distance of the effector to the goal during the episode (rollout). The following lines are averaged from 5 runs. 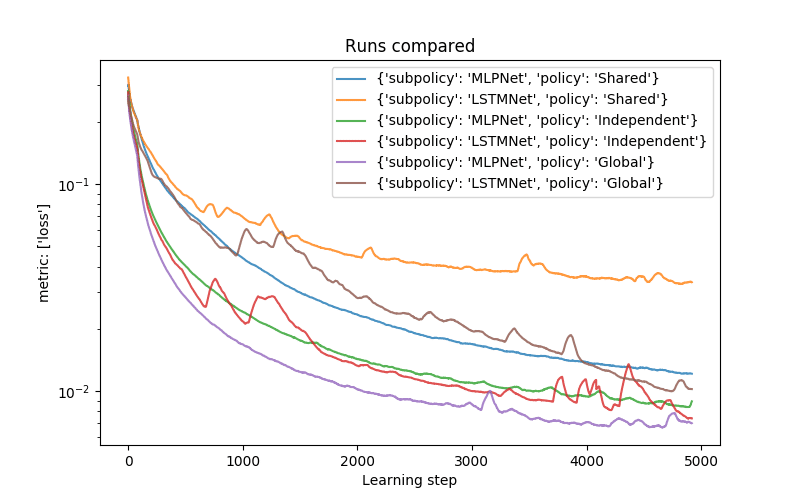 We can see that both shared policies (MLP and LSTM) tend to converge to worse performance than other versions. This is caused by the fact that there is no communication (the Experts have to coordinate implicitly) and the Experts ‘do not know’ exactly in which part of the robot they are.

Here we can see how the trained policies perform.

But the main benefit of this approach is that it should be able to generalize to different robot sizes.

The Global version cannot do this (since it would change sizes of inputs/outputs of the ANN), while in case of Independent policies we can add Experts, but we don’t know how to chose their weights.

Since the Shared policy has the same weights everywhere, we can easily reshape the robot without retraining the Experts.

The following animations show how the Expert policy trained on robot with 5 segments generalizes to different robot sizes.

The goal of this experiment is to show influence of different communication topologies on the performance of the model and its ability to generalize outside the training distribution.

Compared to the previous experiment:

This task requires the Experts (robot segments) to communicate with each other: the effectors have to share own goal to the non-effector segments in order to collaborate on reaching the goal.

A basic CommNet model [Sukhbaatar et al 2016] (where the messages from communication channel are aggregated by averaging) was used. Here, all parameters between Experts are shared and the model does num_passes of communication steps between the environment steps.

The following image depicts the CommNet with two modules/Experts with num_passes=1. The part between green dashed lines is repeated num_passes times before computing the actions. 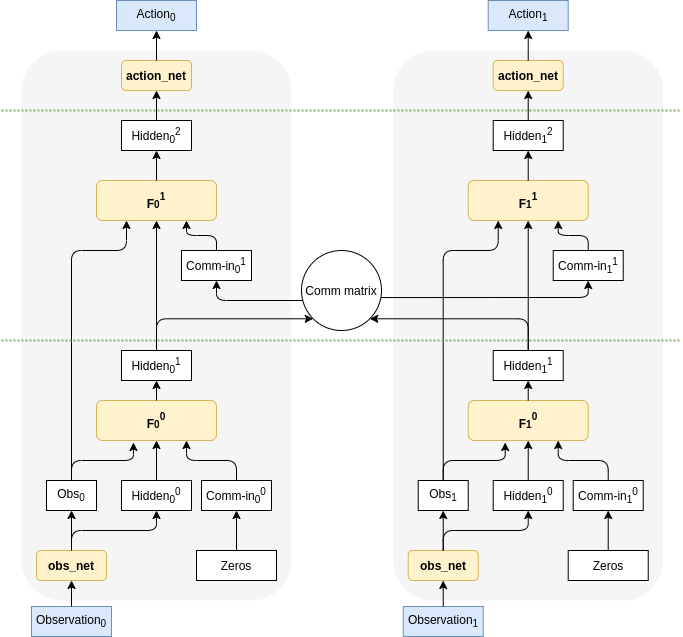 The following versions were tested:

All these models are compared on the two following versions of communication matrix:

The following graph shows convergence of the models on the robots with 8 segments without branching (each line is average from 3 runs).

Linear robots imply only one goal per robot, therefore a structure in the communication is not important (since the whole robot has the same goal).

The only notable difference in performance is in the case of LstmCommNet, which uses num_passes=1. In this case, it takes more steps to message to propagate through the robot, leading to worse average distance to goal. It is also noticeable that RnnCommNet converges less reliably, which is probably caused by the shared weights between communication steps. 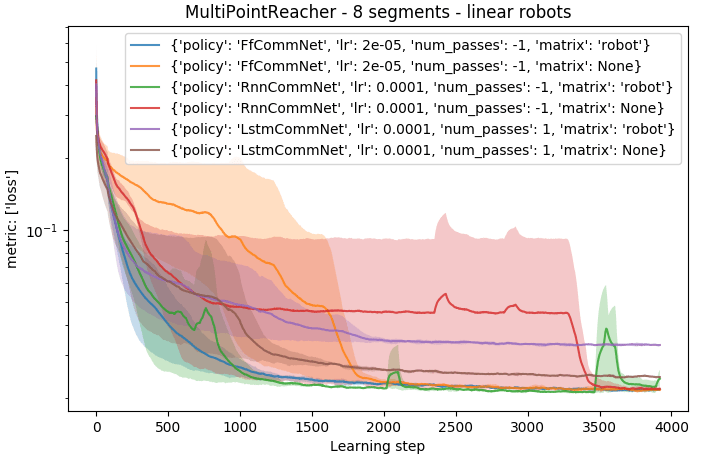 The following graph shows comparison on branching robots. Here, the communication based on the topology of the robot clearly helps to achieve higher performance compared to the fully connected communication.

The constraints given by the topology help to isolate goals produced by different effectors. 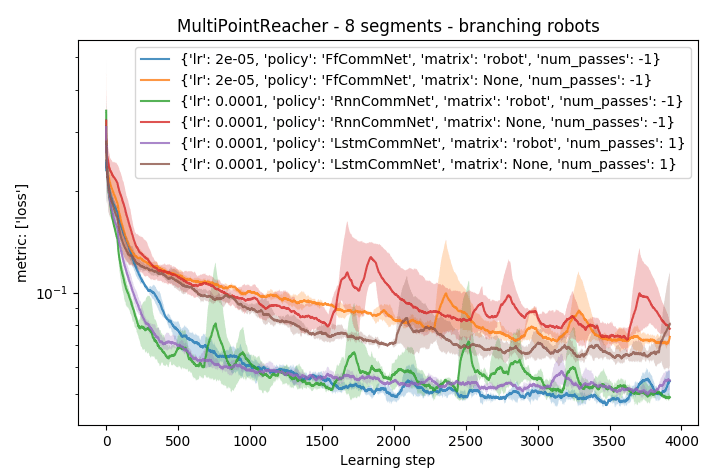 In case of communication in the modular systems, one of the most interesting questions is how the communication should be structured.

In the case of branching robots (multiple different goals of the agent), it be seen that constraining the communication by the robot skeleton helps separating concerns about these goals and therefore helps particular segments to specialize in their behavior.

Since the communication is local, it leads to better scalability of the whole agent.

The policy which uses skeleton for communication still performs reasonably well, since different part of the topology can focus on different goals.

Left: the fully connected topology, right: the skeleton-constrained one:

The following animation shows the response of the policy to change of goal positions of one of the goals. It can be visible that fully connected one (left) performs worse and is not able to manipulate specific parts of the robot separately. While in the skeleton-based communication (right) parts of the robot respond much more independently.

The experiment is work in progress, but illustrates a potential direction of further research.

The question is: is there a way how to discover an efficient communication topology automatically?

Here, the idea is based on the assumption that it is that the target_expert needs to receive messages from other experts whose observations it influences. From these experts it should receive messages with requests what it should do.

In case of this task, the target_expert should receive messages from other experts whose positions it influences. There is a pre-task coordination phase which goal is to determine the communication matrix, which would be suitable for a given robot.

The first proposed algorithm has a form of fixed heuristic algorithm and is based on the assumption above. During the coordination phase, only one target_expert outputs random actions at a time (others output zeros). The comm_matrix corresponding to its inputs then contains average magnitude of change between consecutive observations of other source_experts.

This way, the comm_matrix is automatically discovered and used for the communication during solving the task.

The following graph shows comparison of training with the heuristic coordination algorithm on branching robots (since in case of linear robots, the difference is not significant).

Naturally, this heuristic algorithm discovers communication topologies that are different than the skeleton-based ones (see below). In the automatically discovered case, each Expert receives messages from all other Experts it influences in one communication step (which might be more efficient but might cause more message mixing), while in the skeleton-based case, the message delivery can take multiple environment steps, but there is always only num_children messages averaged together. 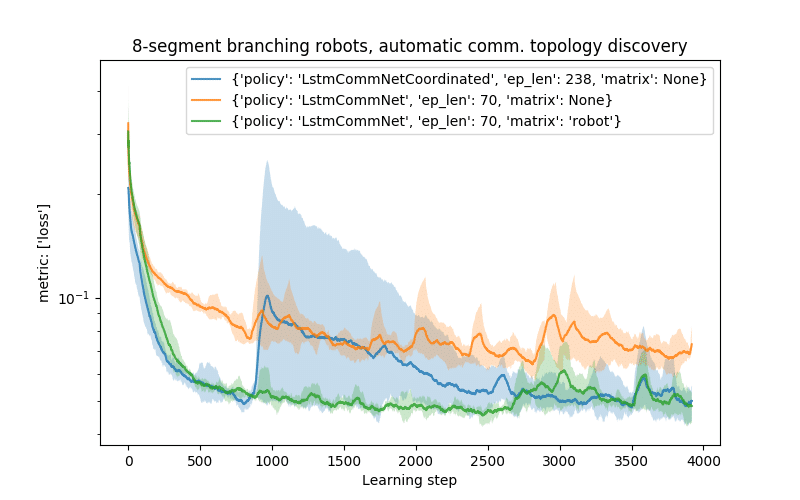 This is an illustration of automatic discovery of the communication topology. During the pre-task coordination phase, only one segment moves at a time, the heuristic algorithm records how the actions influence observations of other Experts, this is recorded into the comm. matrix.
Finally, the comm. matrix entries are thresholded to 0/1 values and task inference starts. In the 8×8 comm. matrix (shown left bottom in the animation) each row corresponds to the message recipient, and each column to senders. For example: a value 1 (green) in [row 1, column 2] means that Expert 1 receives message from Expert 2.

Our goal could be described as a modular meta-learning architecture. These experiments are a small stepping stone towards that. The aim here is to show several benefits of modular approach to learning and problem solving, compared to a monolithic one.

In the modular approach, there are several open questions (e.g. how to split observation spaces amongst individual Experts, or how to merge actions proposed by them). These tasks were designed in a way that the problem of splitting/merging is solved trivially and we can focus on other questions, as e.g. an efficient and general communication between Experts.

Then, one of the future goals is to address this question of this division of data between Experts, where the experiments will shift from “agents in the environment” more towards “Experts in the brain of one agent”. An inspiration to this can be seen e.g. in [Locatello et al, 2020].